A huge turnout for this race, narrowly beating the previous record (181?), despite slightly unpromising windy/damp conditions. Quite wet underfoot, with a bit of a headwind near the summit (I'm looking for excuses for being a minute slower than last year...). Jez Brown's great form continues.

Six Buckley Runners completed Race the Train this year. But over 40 people and 6 dogs turned up on the campsite. So we had a good party, several actually.

Conditions for the race were difficult. The morning was cool and damp with rain showers but it made the tracks and fields very slippery. In the afternoon the rain stopped and the sun started to break through. 30 minutes into the race and the temperature was rising. The light breeze was blowing straight up the valley, so the first 7 miles felt very hot. After turning round it was cooler but the ground conditions following such a wet summer made progress hard. Race times all round seemed slower than last year with only 103 runners beating the train.

I have booked the campsite for next year.

Rob
Posted by buckleyrunners at 23:41 No comments:

Tales from the dark(er) side

As some of you will know I have been aiming for the Lakeland 50 for the last couple of months. Why such a long race ? Well '50 at 50' had a nice ring to it, well at least it did when I entered ! Reality bit when I went up for the recce in April & could hardly walk for the next week. Having said that, I'd survived the 28 miles, and the 7 hours on my feet, so it gave me some confidence that I might be able to do the whole 50.

Once London was out of the way, specific training started in earnest i.e. a few long runs on Friday nights on the Clwydian hills, mostly in horrendously wet weather (but at least I'd be ready for what the Lakes could throw at me !). One of the perceived wisdoms for this length of race is that you 'walk the uphills', which I got really good at - so much so that when I did John's 'The Beast' race it was a real shock that people were actually running uphill, and unsurprisingly I finished well down the field !

As for the race itself, the 50 was actually the little brother of the 100 mile race, which started on the same night as the Olympics started. (One of the 'in jokes' was that it was nice that the country was doing a countdown to the start of the 100). So pre-race nerves were avoided by watching the opening ceremony. Reality bit when we were bussed up to the starting point at Dalemain in the NE Lakes. Start time was noon, which meant that most of us could look forward to finishing in the dark (one of the compulsory items on our kit list was a head torch, so running the Dashes in the Dark was going to come in handy). There were 500 of us nervously waiting to start, and once the claxon went, there was the usual adrenaline-filled rush away from the start, but things settled down pretty quickly.

I won't take you through a blow-by-blow account (if you're really interested I can tell you over a drink !). Essentially what followed was a brilliant experience - mild panic when cramps set in early, but this was overcome by a large dose of electrolytes; fantastic views at numerous points along the way; minor frustration by going the wrong way into Ambleside, but it only added a couple of minutes; great camaraderie - I actually ran the last two legs with someone from Chester, who had relatives in Deeside & Alltami !; running, well walking actually, the last leg in the dark; the final welcome at the finish at Coniston, where everyone who's finished plus all the supporters cheer you in to the area where you get your 'finishers medal'.

I was worried that I wouldn't be able to get out of bed the next day, but obviously the trails must be good for the legs as I didn't feel too bad (although I wasn't too sprightly playing football with my son that evening !).

See you all back up at the club soon
Dave

Time for something to eat at the second checkpoint 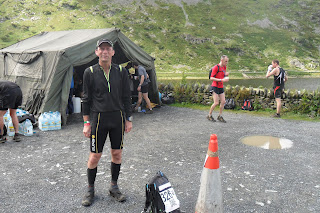 Heading up the Garburn pass 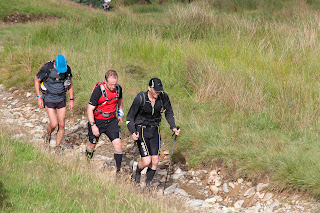 Coming into the checkpoint in Ambleside 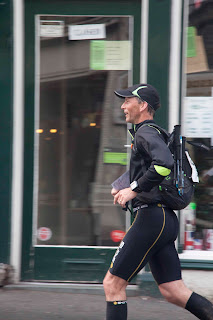 Posted by buckleyrunners at 20:34 2 comments: