Nant -witch (I know, I know) played host to a coven of  off road Buckleyites last weekend. Braving rain, wind and bacon sandwiches, the 'team' took on the roughest terrain in the South Cheshire Harriers race calender covering as they describe 'a gruelling nine miles cross country' course of mixed terrain.
At the first 'hurdle' several front runners were left unshod and searching for shoes in the depths the Cheshire Mud Flats. Not so the nimble footed Buckley Crew, Jez burning a trail to be followed by the rest, albeit  a little time after.
'Dairy Country' grass fields gave way to tarmac to be followed by recently ploughed ground that disrupted stride rhythm simultaneously setting fire to quad muscles just before popping a hill in the way to make sure the lactic definitely built up nicely.
So how did we do, blinking well I think would be the appropriate terminology, scores on the doors then,

Not a bad day at the races and to put the icing on the cake Buckley were publicly thanked for their continuous unerring support of the race and performances overall.
Worth having a butchers at the photos.
All best Horror

Posted by buckleyrunners at 20:55 No comments: 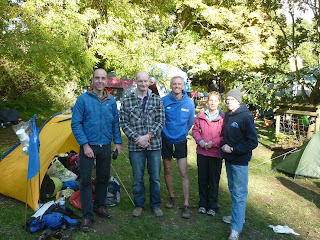 The fell race relay championships is a huge event, attracting the cream of British fell running clubs. We last competed four years ago, when it was hosted by Martin Cortvriend in Llangynhafal. This year, Mercia hosted the event in the Shropshire hills. It's a great day out, and the weather was perfect this year: sunny, cool and clear throughout. Some clubs send three or more teams to the event, but we could just about muster the 6 runners needed until disaster struck the week before the event - when we lost two of our key men to injury. John spread the net wide looking for replacements, eventually resorting to practically kidnapping a 'guest member' at the Collie on Friday night (take a bow, Roger Squires, who was prepared to drive down on his own to Shropshire with 48 hours notice!). Dawn also stepped up to take on the other empty spot, on the long 'pairs' leg with John - involving a massive 900m/3000ft of climbing, with the route finishing over the notorious final section of the Long Mynd Valleys fell race with three killer climbs. Dawn and John put in the performance of the day, a massive effort, although Simon E's superb top 30 finish in the first very steep and fast solo leg ran it close (bear in mind this event attracts the very best runners in the sport). Jeff and Simon R had the third (navigation) leg. This is orienteering-style, with the map kept secret until the start. We took some decent route-finding decisions with a few nifty short cuts and managed to work our way up the field to 45th place, before guest runner Roger finished off with a decent showing in the final solo leg. So despite being weakened by the injuries we had a very enjoyable day out, and finished in the top half of the field, in 76th place, ahead of all our local rivals. It's a great team event, quite exciting, so maybe one to consider for next year?
Posted by buckleyrunners at 10:40 1 comment:

Over the last few months we have been fortunate to welcome a number of new runners, to run with us and even to join as members .

This post is from Rob Davies- tonights Buckley run was my last pre- Chester Marathon run. Tonight with J & S here is the link to my Garmin record , DOWN wood lane and back UP Liverpool road , a little bit of hill there thanks J. !!

If anyone has a spare few minutes on Sunday morning or particularly lunchtime , there's be a few 100, or even a few thousand runners in the Chester Marathon. One of the few marathons in the world which is run in 2 countries. Yes the other is Rome . The route for Chester is here at this link.  It would be great to see anyone along the route , particularly the Aldford Huntingdon SandyLane back into Chester section. But anywhere would be great.
Happy Running folks.
And drop along to the Elfed School Buckley Sports Centre on a Tuesday or Thursday evening for 7pm and you ll usualy find some Buckley Runners going for a run in a few minutes.
Posted by buckleyrunners at 21:28 No comments:

A long and hard fell race that starts from Ramsey on the north coast of the Isle of Man and heads to Port Erin in the SW - 50k/32miles with 9000ft of climbing over 16 or so peaks. Rather wet underfoot with a headwind, but still something of a weather window with superb coastal and mountain views throughout. It's a long established and famous fell race, and a classic, logical route along the hilly spine of the Island, so Jez's 6th place is very creditable, with Simon R finishing in 11th place a little later on. The toughest part of the weekend (for a non sailor) was a very rough crossing back in gales on Sunday!
Posted by buckleyrunners at 11:55 1 comment: