The following races are to be included in the Championships:

INOV8 are awarding a pair of fell shoes to the first three in most age categories as long as the competitor has completed 4 races (including one at each distance).
Must be worth a go.
Fen
Posted by buckleyrunners at 17:28 No comments:

The following races are to be inclused in the series:

A competitors best results from up to 6 of the 9 races will be counted in the series. Every finisher will score points. Scores are based on the competitors time behind the average of the first five finishers. Your score will then be taken away from 100 to make a positive score. If you do not compete in a race you will score zero.

Hope you all understand that, it come off the gumff.
Fen
Posted by buckleyrunners at 17:15 No comments:

According to the Wrexham Road Runners Website (http://wrexhamroadrunners.org.uk/) this morning, the Race has been cancelled due to bad weather.

Thanks
James
Posted by buckleyrunners at 08:28 No comments:

Dash in the Dark

Simon R had an excellent race to come 2nd (despite missing a short section of the course, for which he was forgiven by the organisers, probably because he was over 3 minutes ahead of the next finisher !)
Dave was 4th, and first MV40, on his first outing in the event (I must put better batteries in my head torch next time !!)
Huw was 5th and first MV50
Pete Roberts was first MV60, closely followed by John Morris

so a rather successful 'pot hunting' expedition for the Buckley boys.

The evening finished with Ben announcing another race, to be held on March 5th - see you all there.

Sunday 14th February 2010 - Valentines Day, we all know how to enjoy ourselves!
Loads of Buckley runners turned out to race up the sea front, around a caravan park and back along a sea front. One Marshall shouting out to me with 600 metres to go "it's flat all the way now", great I thought, I might die in a minute!

See you all soon
Fenella
Posted by buckleyrunners at 20:18 3 comments: 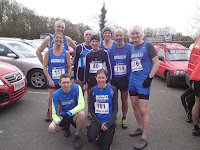 Nine Buckley Runners who appreciate the value of a "loosener" before the Border League on Sunday made the trip to Parbold for the 40th running of this classic event. 6.75 miles of hills and mud! A bit of road but mainly fields, tracks, stiles, gates and even a stream.

I was new to this event. I can't think why I waited so long. It is very enjoyable. A big field so lots of racing, a huge improvement on the last couple of races when I ran and finished on my own. Some interesting opportunities to overtake by taking "route one", straight through the mud while others tip-toed around the outside.

I had a good race to the finish too. Makes a nice change. I was given the same time as the runner I re-passed in the last 5 metres. It was that close. Did I enjoy it? Of course. Would I do it again? You bet? Would I recommend it? Yes - to anybody who will listen.

Huge thanks to John and Paul for encouraging me to go.

Rob
Posted by buckleyrunners at 20:56 2 comments:

Posted by Rob
Posted by buckleyrunners at 22:45 No comments:

An impressive number of runners made the journey west to Llandudno, for the Nick Beer 10k and its scenic loop of the Great Orme. A big field of 540, with good conditions on the day: hazy sunshine and even the tiniest hint of an easterly breeze to blow us all up the hill.