I just wanted to apologise for Buckley Runners Race Results not being in the paper for the last few weeks, with a last minute holiday and starting a new job things have been manic but all should be back to normal now.

Dawn
Posted by buckleyrunners at 15:58 No comments:

On Wednesday night a number of fellow Buckley runners made the trip to Capenhurst for the 5K which is one lap of the Ellsemere port Border league course. There was a reasonable sized field with a lot of clubs represented from far and wide the Buckley runners places were;

I always thought Tommy Cooper was a great comedian. Now I realise that Martin Cortivried is a comedian too. Cos if he thinks I am going to run up all them hills - hes 'aving a larf.

I checked it on Mapometer - 9.44 miles (measured on the flat so the distance on the ground is a lot more) and probably about 3,400 feet. No wonder people reckoned it was 'ard.


Another great race though. Don't have any results - you'll have to add your own.

Rob
Posted by buckleyrunners at 23:41 4 comments:

Race the train – a family affair 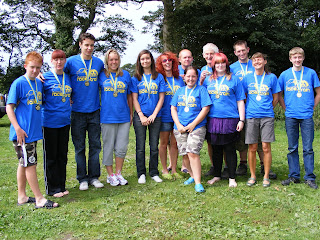 This was the 26th running of this classic event. Buckley runners were there again although the numbers were down a bit. Not surprising after the awful weather in recent years. We camped at Ynysymaengwyn as usual with 18 of us camping and 14 running plus one runner who came down for the day. The weather was much better than recent years, not difficult after last year’s cold, wet and windy conditions. There were plenty of impressive performances too.
Two Buckley Runners beat the train; Paul Stinton was 101st in 1.44.24 and Dan Hollingsworth 149th in 1.47.48. Well done you two; Paul overcame last year’s injury and Dan as a new comer to the race was impressive.
The rest of the races were family affairs. Results are by family instead of by event. It makes a change!
Jane had family runners in all four races; Jane had a good run in the 14mile race finishing 457th in 2.07, David was second in the 10k in an impressive 39.43, girlfriend Jess did the 5.5 mile race in 56.56 finishing 76th and sister Amanda was 44th in the 3.5 mile race in 25.11
Paul was 259th in the 14 miler in 1.56.33, Tracy 155th in 10K in 1.00.53 and Sean 66th in 3.5 in 26.34
Sue Ridings was 792 in the afternoon race in 2.32.22 after son Elliot had posted 25.29 (57th) in the 3.5 miler in the morning.
Rob running his 15th RTT clocked a poor 2.38.07, struggling with a back problem throughout the race. His family fared better. Son Peter was 106th in the 10km in 55.53; Pete’s girlfriend Abbie in her first ever race was 117th in the 5.5 in 1.07.05. Rob’s daughter Kat also in her first race was 123rd in 1.24.26.
Altogether a good day at the races. Followed by a late night revelling in the memories of the day. We have booked again for next year’s race on august 21st 2010.
Posted by buckleyrunners at 22:51 1 comment:

Simon Edwards came a very impressive 5th overall in the arduous Gladstone 9 fell race last Saturday. The route leaves the coast near Penmaenmawr to head up Tal y Fan via a circuitous route and descends through ancient stone circles and a sharp finale over Foel Lus. If anybody else did it, apologies (let me know if so!).
Posted by buckleyrunners at 18:42 2 comments:

On a wet & misty night, a number of intrepid of Buckley runners ventured out to the Horseshoe pass to have a go at this short, but aptly named, hilly race.

The start entailed a chest-tightening ascent up to the mast above the Ponderosa ( I only know that because I've seen the mast there on other runs ! ), followed by a fast track of reasonable width down to a sharp right onto a path where the real fun started. To say that the path was narrow was an understatement. Footwork had to be of the twinkle-toed variety to make sure that you didn't fall over, or sink into a bog ! A few more up & downs led to another stiff ascent to the finish ( I'm sure it was steeper than last year ).

Anyway, enough waffle, Jez was first home, again ( I'm sure he must be getting bored of this by now - come back Westy & give him a run for his money ), Simon Roberts was next ( bit short for him as it was under 2 hours long, but a good pipe opener ), Dave B followed, struggling up the last hill, just ahead of Steve Bellis. Paul Stinton was next, running for Clwydians, with Huw Lewis snapping at his heels.

Pete Roberts was first in for the V65s, winning a nice bottle of red wine (which he will only drink because it contains lots of good anti-oxidants to help his running - honest !). 'The Goat' was close behind, holding off the strong finishing Chris Higgins, and Jack Thomas was next, just pipping Fenella Higgins to the finishing post.

A real fun event, and 132 runners turned out on the night, which must be a record.

Times are pretty irrelevant, but if you want to see them, visit

PS Where was the Goat's apprentice ?
Posted by buckleyrunners at 18:36 No comments:

An excellent performance by John Morris in the Garn fell race last Saturday. This brutal short race, which involves an unrelenting 2000ft climb from Rhyd Ddu up to the summit, was a British and Welsh championship event this year: which always means an ultra-strong field. John came 54th in 38.29 (6th V60).
On the same day, Simon Roberts marked his return from holiday in warmer climes by plodding round the soggy Borrowdale fell race in the Lakes in a less than scintillating 4.14.39. This classic long route is almost 40 years old now, and takes in the summits of Bessyboot, Scafell Pike, Great Gable and Dale Head in its 17 mile journey.
Posted by buckleyrunners at 10:04 No comments: