As the saying goes, never again (well, until the next time at the Snowdonia Marathon in October !)

Paul D said to me at the Presentation do "Whatever you do, don't go off too fast" to which my reply was "How do you know what's too fast ?" ... well now I know !! Anyway, as Les would say "At least it's in the bag".

So enough waffle ... the scores on the doors were:

Thanks to all the supporters on the day .. Rob M, Dan, Chris & Fen, Jack (sorry if I missed anyone)

Dave
Posted by buckleyrunners at 21:21 2 comments:

The weather forecast was about right. They said it would rain in Dolgellau. That is not very hard to get right but I was told that it is unusual for the annual Cader Mountain Race to be so wet.

It wasn’t raining much when we got to there. The marshal at the start warned that on the summit it was windy, raining and visibility was down to 30 metres. We left Eldon Square at 1 o’clock and within a few minutes the sun was shining as we climbed out of the town on the tarmac. I began to think that he was wrong. After 2 km we leave the tarmac and run along the side of a lake, through woods, bogs and fields. Weather still OK. At 4 km we start to climb the Pony Path, zigzagging up towards the ridge. We can see the ridge but soon a fine, misty rain is falling, I put a waterproof top on. At 6 km we reach the checkpoint and turn left along the ridge towards the summit. The summit is 2 km away and visibility down to 100 metres. Raining much harder now! It’s a good run to the top, a mixture of soggy paths, well laid stone track, some stony bits and towards the summit, scrambling up rocks. He was right about the weather. It was very wet, windy and the magnificent views from the summit consisted of 360o clouds, I didn’t measure it but 30 metres was about right. Then all we had to do was to turn round and run back down. Eldon Square looked very attractive when we got there.

From my point of view I was quite pleased. I had been worried about the “cut-off”; they turn you round if you have not made it to the ridge in 1 hr 15. I made it with 13 minutes to spare. I enjoyed the run, and would have done better if my trainer had not suffered a severe malfunction. I heard it rip in the first couple of miles, by the finish the sole had parted from the upper and I flapped down the last quarter of the race like a one-legged Gollum. But it was my first ever “big” mountain race, so I was happy with day.

Posted by buckleyrunners at 09:17 6 comments:

Saturday 22nd May was the Lletty Fell Race from Llangynhafal incorporating the Inter-county fell race. This is the fifth running of this event, and in typical Martin style it is tough. And the heat made it a bit more so. It is the same course as the Tafarn Trail last Autumn, with five good climbs totalling nearly 3000 feet in 9miles.

There were 211 finishers in a very high class field. The course record was beaten by 14 minutes, with over 30 runners completing the course inside the old course record.

Buckley Runners had the usual gang of suspects out, happy to have a go at anything. And others were out on the course, marshalling, cheering on and providing much needed fluids. Everybody who finished deserved a medal on a day when many experienced runners succumbed to the heat and the terrain and failed to finish. Jez and Simon had superb runs.

Posted by buckleyrunners at 11:11 No comments:

Apologies for delay with this. Some excellent times recorded, with a few (Dave B) using it as marathon training and others blowing up completely on the savagely steep hill to Eccleston!

You must complete 1 race from each category to qualify for points and every extra race you complete off the list earns you a point, so the more races you do the more points you score.

Posted by buckleyrunners at 17:14 No comments:

Well worth the drive out for a friendly race organised by Brenda Jones
Posted by buckleyrunners at 21:36 No comments:

The club’s annual presentation was held in at Loggerheads On Sunday 9th May. Nearly 20 of us went for a run first down the Leete and alonmg the edge of Moel Famau. It must be the biggest club run we have had for years, it was a good sight. The dog-walkers in the country park must have been amazed. At 11 o’clock we descended on Caffi Florence for tea, coffee, soup and cakes and chat before the presentation of awards.

Chairman Rob Mackey welcomed everybody and presented the awards for the Borders League and Cross Country series. There are awards for the top four ladies in each discipline, and six and ten for the men in Cross Country and Borders League. The numbers reflect the number of “counters” in each league. The points system is biased towards people who turn up for all the races, the points awarded to the first finisher being approximately twice the number of runners, so even the last finisher scores about half points. Results are below. Erika was first finisher for the ladies in every race for both CC and BL. Jez Brown was first finisher for the men in all 6 BL races.

John Morris presented the prizes for the club championship. Fifteen club members who scored over 100 points were awards prizes receiving a variety of gifts. The top three ladies and men were given a club award too. Results are below. Rob thanked John for his work organising the championship.

Every year at the presentation members select the recipient of the “Members Award”. Nominations were received for Jane, Sue and Paul for their work behind the scenes keeping the club going. Rob added his thanks to them for their effort, emphasising the vital role, and often thankless tasks they do. Les, John and Jack were nominated for their support for other runners and the help they give all year round. Chris Willman was nominated for efforts. He has competed well and made huge improvements to his times throughout the year. We wish him well running the Edinburgh Marathon for charity later this month.

The clear winner of the award was Erika Robinson. She has had a fantastic year; North Wales Road Runner of the Year, selection for both North Wales and Wales, 1st senior lady in Border League, a medal at cross country (only just!), a PB at almost every distance and finally as superb PB and 87th lady overall in London Marathon. The club is proud present her with the members award to acknowledge her efforts. Well done Erika.

Rob finished by thanking Hazel for organ sing the event and wishing everybody a good summer, and looking forward to the next year of competitions. Thanks also to the staff at Caffi Florence and to Dragon Trophies for the awards.

Erika Robinson for outstanding performance throughout the year.

The Wrexham 10 miler was run on Saturday 24th April in unusual heat. Everybody agreed that it made a difficult race and the industrial estate offers little relief.

Three Buckley Runners competed. Jez Brown finished in 60.07, an excellent time and a good position too, 9th overall and 2nd MV35 in the North Wales Championship. Shaun Hooson was 15th overall, 2nd MV40 in the champs in 63.01. Bringing up the rear and struggling in the heat was Rob Mackey; 76th overall in 97.04, but rewarded with 3rd in MV60 in Championship! So nobody went home empty handed.

But I have a question. It is a two lap race. The last two miles of each lap is up hill. The rest is flat. Why is there no downhill? 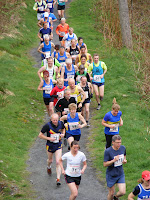 Saturday 1st May saw 7 runners and as many friends and family and non-runners as supported high on a hillside mid-way between Aberystwyth and Llangurig for the Red Kite Challenge. This is an 11 mile trail race over a superb course. Constantly up and down, with a mixture of forest tracks and paths, occasionally very steep and winding. Some interesting sections of humps every few metres, carefully designed to break your stride pattern.

It is a fabulous setting, and the red kites, hundreds of them, are awesome. The size and colouring of this once endagered predator make an amazing sight as they feed.

An excellent day, spoiled on a little by the hail storm, was capped by the usual haul of medals for the club.
Results

Posted by buckleyrunners at 12:57 2 comments: